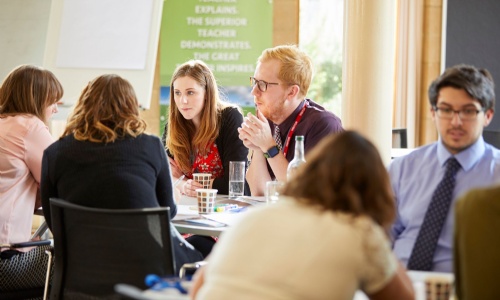 I have a confession.  It took me ages to ‘get’ coaching.  There are two reasons for this.  One: I like solving problems. Two: personal stuff embarrasses me. So, given my confession and two frank reasons, how have I ended up being a passionate advocate and champion of coaching?

I can’t solve all the problems

This was a slow realisation for me in my leadership journey.  I didn’t really crack it as a Head of Department if I’m honest, and I only really understood it in the latter years of being a Deputy Head.  I can’t solve all the problems.  I just can’t.  But you see, I want to.  I really do.  My instinctive response when someone comes to me with an issue or dilemma is to jump in with a solution.  Call it arrogance, or naivete, or control-freakery – it makes no difference – it defined me as a leader for a long time.  It’s something I still fight within me now – that tendency to want to offer a solution, an example, an anecdote from my back-catalogue of successes and failures. I have to hold myself back, and that’s quite tough.

I know what you’re thinking.  Sometimes people do want a solution, a piece of sage advice, a vignette of personal experience.  That’s true.  Sometimes they do… sometimes.  That’s the skill of leader; to realise that sometimes is different to all times.  Figuring out the difference isn’t always easy, and I quite often got it wrong.

Here’s an example.  A Head of Year came to me to talk about the problem they were having with a tutor.  The tutor was not as willing as they might be to contribute to the planning of PSHE and the Head of Year was finding this frustrating.  The Head of Year had spoken to the tutor, but that hadn’t worked.

My response consisted of sentences that started like this:

And then it got worse…

Consider for a moment what I had just done… stripped the Head of Year of confidence, autonomy, agency and power.  I thought I was helping.  I thought that’s what good leaders do. The Head of Year was young in her leadership journey - developing her skills in tackling difficult people, experimenting with a range of approaches and was keen to demonstrate that she can fulfil her role successfully. Instead of supporting her to develop these skills, I just robbed her of the opportunity – all in the name of being ‘helpful.’

A nuance of leadership is recognising when someone needs you to step in and when they need you to step back.  In the example above, I should have stepped back and asked the Head of Year what she needed to achieve and how best she thought she would do so.  I certainly should not have undermined her.  My barrier was my ego.  I wanted to save the day.  I wanted to be appreciated for being a rescuer.  Rescuing feels good.

What I realised as I became more experienced is that although rescuing people feels good, empowering people feels even better (and it’s less exhausting).  However, I only truly realised this by accident.

Sometime after the example above, a different Head of Year came to ask me about a tricky situation with a parent who was accusing a tutor of singling out his daughter unfairly.  Now, at the time I was overwhelmingly busy and despite wanting to rescue her, I simply couldn’t. I literally had no time. I had to step back.  My response consisted of sentences that started like this:

‘What is your approach to…?’

The Head of Year came back to me a few days later to say thank you.  She thanked me for coaching her and helping her to realise how she needed to approach the tricky situation, which had now been dealt with.  She was empowered and she had shifted forward in her learning.  She had been given agency and autonomy and was all the better for it. The approach, however jarring for me, had worked for her. That was the start of my realisation of the power of coaching (and I hadn’t even been doing it properly!)

Before you worry that I’m advocating embarrassment as a form of change management, let me reassure you.  I’m not.  However, there is no doubt that the uncomfortable stuff: the personal, embarrassing and cringe-worthy stuff is very, very powerful in helping you to achieve clarity.

Early on in my career, I was coached on a number of occasions.  I absolutely hated it. Why? Because every time it happened it made me feel like someone was wrenching out my soul and hanging it out to dry.  I started every session determined not to reveal anything at all.  I tried adopting an enigmatic, taciturn approach.  Tried responding to each question with a Mona Lisa smile.  But within the space of approximately three minutes I was a weeping wreck, sobbing something life-changing like, ‘I need to leave my husband!’*

Moments like this are earth-shattering.  They force you to face your demons and truly question who you are, what you’re doing and what you believe.  Each time I was coached it triggered a change in my life that really needed to happen. Traumatic it may have been, but by God it helped.

Coaching does not have to be quite as gut-wrenching as that, but often it creates discomfort and frequently it induces tears.  What I’ve learned over the years is not to be afraid of those emotional encounters, not to be embarrassed by them, but instead to embrace them as catalysts for change.

How often do any of us get the chance to speak about how we truly feel? How often does someone ask us what we think, and really take time to listen without judgment or prejudice? The reality is that in the cacophony of our busy lives in teaching, there is little if any quiet space for this kind of deep reflection. And yet it is so, so important.

I’ve worked through my rescuing-tendency and embarrassment-avoidance and embraced coaching whole-heartedly.  It has made a huge difference to me.  I have gained as a coach and as a coachee.  I now have a coach who I see once every month or so and I’m currently coaching an aspiring female leader as part of the DfE coaching pledge.  Training to be a coach, and then refreshing that training periodically, has helped enormously.  Despite there being many different approaches to coaching, one thing is absolutely true: coaching is empowerment.

Please enter some content for your news story here.